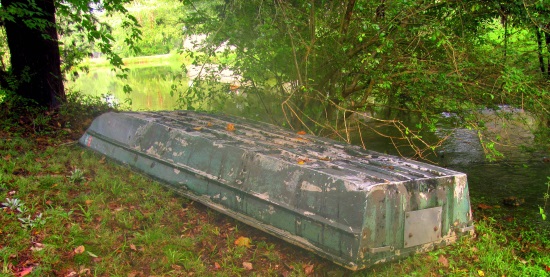 I’m not sure when it happened. Between Friday night and Sunday afternoon. I was probably in the house at the time.

This is the story as we’ve pieced it together, for better or worse. . . .

Some guys decided to fish in the lake in our backyard. That’s okay; we love that. If we know you. Or you’ve asked us. Or we’ve asked you.

But the first bad move is these folks, who weren’t asked or asking and whom we did not know, decided to fish anyway.

The second wrong decision is after their line got hung, they decided to go into the lake to recover it. In our flat-bottomed boat. Without permission.

The next mistake is upon discovering there were no paddles in the boat, instead of requesting to borrow ours in the house, they decided to make their paddles. Out of our footbridge. They tore out two boards and hopped in the boat.

What they didn’t know was that our boat has a leak. They couldn’t have been in it long before their feet were immersed. And not much longer before they had to row back to shore. Or else sink.

One bad decision often leads to another. When we start out doing the wrong thing, that path inevitably leads us to another wrong thing. And another.

Then before we know it, we’re in the middle of a lake in a leaky boat with old planks as paddles.

Don’t end up in the middle of a lake in a leaky boat with old planks as paddles.

If you want to fish, ask first.

Now when I look at our bridge, it reminds me to ask first for what I want.
For permission or help or guidance.

I don’t want one bad thing to lead to another.

“If any of you need wisdom, you should ask God, and it will be given to you. God is generous and won’t correct you for asking.”
James 1:5 (CEV)

“Don’t bargain with God. Be direct. Ask for what you need.”
Matthew 7:7 (The Message)

“Trust God from the bottom of your heart; don’t try to figure out everything on your own. Listen for God’s voice in everything you do, everywhere you go; he’s the one who will keep you on track.”
Proverbs 3:5-6 (The Message)

Do you typically ask directly for what you want? Why or why not? Please share.