Conspiracy theories are having a heyday during the pandemic. 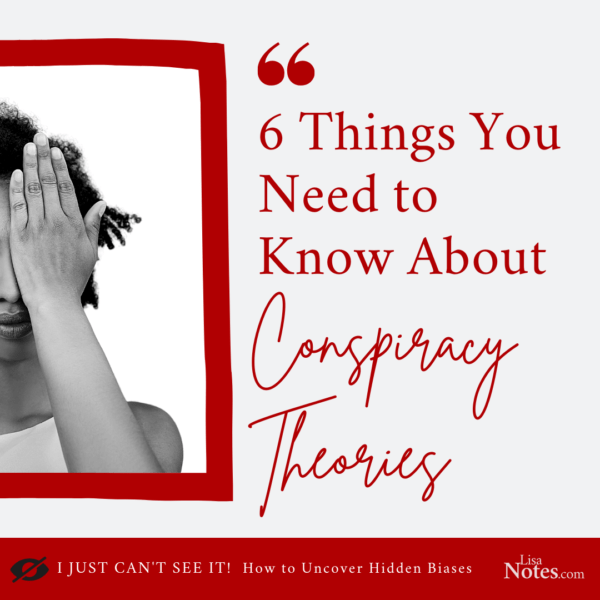 Here are 6 things you need to understand about conspiracy bias and conspiracy theories.

1. What is conspiracy bias?

Conspiracy bias is our vulnerability to believe a sinister story (usually an undercover plot by malicious conspirators) to explain an event or circumstance despite more reasonable explanations otherwise. A conspiracy theory is often thought to be so important that it has to be kept secret from the general public.

Although a conspiracy theory isn’t wrong by default, it is usually discredited because of insufficient evidence.

2. What’s an example of a conspiracy theory?

There’s no shortage of examples of conspiracy theories from 2020, such as:

There is no evidence for any of those theories. They are false. Perhaps they’ll fade away sooner rather than later.

But several conspiracy theories have been popular for decades in the United States and show no signs of slowing down.

Smaller but lingering conspiracy theories include things like UFO coverups and Bigfoot sightings.

Since 2017 the QAnon conspiracy theory has gained a mass following, as well as spawning a host of related conspiracies to coincide with it.

3. Why are we susceptible to conspiracy theories?

Every people group has proven to be susceptible to conspiracy theories, both right and left, rich and poor, old and young.

Why? Conspiracy theories meet our psychological need to understand the world, especially when we’re feeling powerless and threatened, as in times of crisis or chaos in society (hello, 2020).

“People don’t like it when things are really random. Randomness is more threatening than having an enemy. You can prepare for an enemy, you can’t prepare for coincidences.”

But particularly troubling in Christian communities is the mounting evidence that Americans who engage in Christian nationalism are also much more likely to engage in conspiracy theories.

In general, people want someone to blame. So we connect with stories that give us answers and cast others as the villain, but cast us as either the innocent victim or the valiant hero. We crave the sense of belongingness and safety we get with others who are believing the same things.

A conspiracy theory, in an odd way, is more comforting to its adherents than reality is. It offers an easier-to-understand explanation (even though it usually takes several rabbit holes to reach it).

“Conspiracy theories look bitter to those on the outside, but they are sweet to those who hold them.”

4. Why is it dangerous to believe conspiracy theories?

Conspiracy theories throw up obstacles wherever they land.

When taken to the extreme, conspiracy theories destroy relationships and ruin lives.

5. How can we reduce conspiracy theories?

“Prebunking” now is a better technique than “debunking” later.

“Engaging in critical thinking before sharing or believing information that has been shared can stop the spread of misinformation.”

Take measures to discredit conspiracy theories before believing them.

If you know someone who believes a conspiracy theory, begin with respect. Making fun of another’s beliefs, no matter how absurd they sound to us, is no way to gain their trust. Don’t accuse them of being wrong or ignorant or weak, and especially not in a public setting.

Acknowledge their emotional attachment to the theory. Often the theories are based on stories of right versus wrong, good versus evil. Don’t attack their core values; talk about their facts instead. Even then, don’t expect immediate results with your facts when they have facts of their own.

Ask questions and listen to their theory to find common ground. Determine what it would take to change their mind. Value the relationship above the disagreement.

Be patient. Most believers of conspiracy theories have no intention of changing their minds. Until they’re willing to question their own assumptions, they likely won’t accept your debunking efforts.

But if you maintain a trusting relationship, when they are ready to talk, you’ll be there to help them walk away from the theory.

6. How did Jesus handle conspiracy theories?

During Jesus’s time on earth, his Jewish followers were a prime audience for conspiracy theories. They were victims of a cruel Roman regime that often left them feeling hopeless and defeated.

But Jesus provided them with a better story, a true story.

Instead of blaming their dashed hopes on the Roman government, throwing them into a victim role, or demanding they rise up and defeat the enemy, taking on a hero role, he pointed them toward a loving Father who cared about them.

And he told them to care for each other (even their enemies).

His bright story was the light they needed.

And it still is. When others around us feel helpless, hopeless, and afraid, we can remind them there is a bigger story of love to believe in. God empowers us to help heal our world through unity and compassion, not suspicion and cynicism.

Want more? Visit the World Economic Forum article, “Conspiracy theories have flourished during the pandemic – here’s how to stop them in their tracks.“

Click on this infographic from the World Economic Forum to learn more. 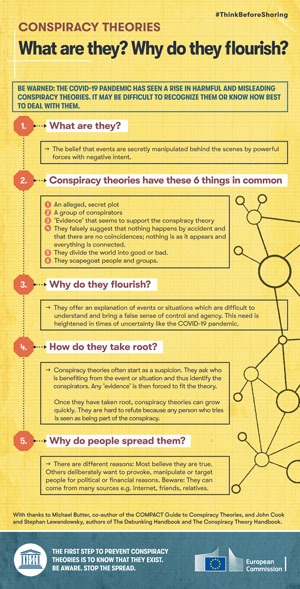 Have you once believed a conspiracy theory? How did you break free? Do you have a friend or relative now who believes one? Please share in the comments.

You are on Day 22 of the series: “How to Uncover Hidden Biases.”

Previous: Scripture Image {Bias Day 21}
“What Are You Looking At?”

Next: Confidence Bias {Bias Day 23}
“They’re So Confident, They Must Be Right”