Did I Really Do That?

I’m not sure what came over me. I hadn’t planned to say anything. But I did.

I was waiting in line to take communion at the retreat center last Sunday. This was the final day of the Southern Lights conference we’d been attending on St. Simons Island, Georgia.

A sweet woman I’d met only briefly just the day before was about to pass by me in the opposite direction. She was on the way back to her seat after having already received the bread and wine.

But she paused when she saw me. Quickly and quietly, she reached out her hand. We locked eyes. I put my hand on her shoulder and leaned in.

I whispered five words in her ear. I knew why. But did she understand?

She responded back, “I know, right?”

Then the line moved on.

But I won’t forget her.

Only minutes earlier, we’d been listening to a message from the powerful Reggie Williams, not the retired NBA basketball player, but the Associate Professor at McCormick Theological Seminary and author of the renowned book, Bonhoeffer’s Black Jesus (I haven’t read it yet, but I want to).

Dr. Williams, or Reggie as he called himself, had been delivering a powerful message about Elijah being weary after his battle on Mount Carmel with the prophets of Baal. He reminded us we, too, can get weary as we long to share God’s genuine love in this world.

Rest when you need to, but don’t grow weary, Reggie told us.

He talked about the oppression still in our country. About how “there’s no hate like Christian love.” About how freedom is when we are “free to love each other.”

And he talked about how so many have tried to take away freedom from Black women in particular, to control their bodies, for so many years.

When he said that, I thought of the new friend I’d briefly met Saturday.

She had stood up in our small group session and told us her story. She’d been sex trafficked for 15 years. She finally broke free from it. But when she went to church, she was met with roadblocks from some white folk in her struggle to crawl to the cross.

But she made it anyway. She went back to school. And now she’s well on her way to securing her PhD.

So after Reggie’s sermon, when this woman of God walked by me in her majestic Black skin, I felt compelled to whisper these words, “Don’t let anybody control you.”

Looking back, I wonder if she wondered why I said that. Maybe she thought I was just a crazy white woman. Maybe I am.

But no matter. I know why I said the words.

I wanted to encourage her to stay strong in the freedom she’s found.

Because I need her to stay free. I need to see the work and wonder and Love she’ll be putting into the world for years to come.

I know we’ll all be the better for it. 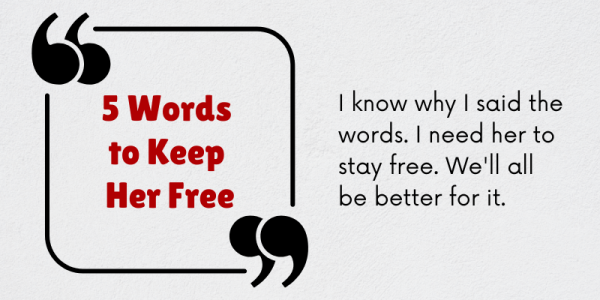 Over 15 years ago, Molly quietly spoke two words to Stephanie after only knowing each other a week.

I got goosebumps reading Stephanie’s story. It prompted me to remember and write down my own incident I just shared above.

Read all of Stephanie’s post here, then add your own links below.