The theme for week 4 of Nonfiction November is “Stranger than Fiction.” Link up with Christopher at Plucked from the Stacks. 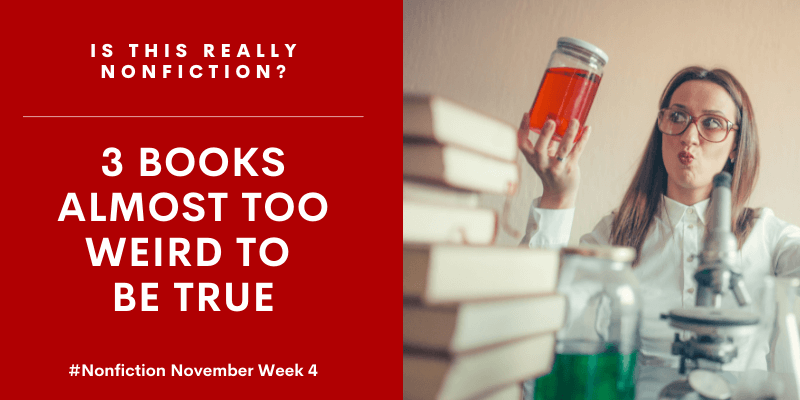 1. Leaving the Witness
Exiting a Religion and Finding a Life
by Amber Scorah

Amber Scorah was living her life as a faithful 3rd generation Jehovah’s Witness. But little by little, she began to see cracks in her religion. And she wanted out, even though she was now an undercover preacher in China. This is her story.

“Was I a good person? The righteous war of black versus white, right over wrong, good against bad, had given meaning to my life. It was comfortable to know that everyone was wrong and you were right.

“I had known who I was by which side I was on. But there are not only two sides, there are thousands of dimensions to things.

2. The Biggest Bluff
How I Learned to Pay Attention, Master Myself, and Win
by Maria Konnikova

Is it possible for a journalist to to learn how to play poker and become a professional tournament winner in a year? This book is about far more than just the game of poker though. Konnikova also learned lessons about how chance works in life.

“Here was the cruel truth: we humans too often think ourselves in firm control when we are really playing by the rules of chance.”

“More often than that, it’s not the best hand that wins. It’s the best player.”

3. How God Works
The Science Behind the Benefits of Religion
by David DeSteno

This isn’t actually about how God works per se, but about how religion works. DeSteno shares fascinating research about religious rituals among many belief systems from around the world.

“Uncertainty in the realms of morality and fate—the realms that religions dominate for many people—is taxing not only because it requires the brain to simulate so many options, but also because of the emotional consequences involved. And it’s here that belief comes into play.

“With belief—that God will intervene, that a ritual will heal, that a choice never to lie or cheat ensures the best outcomes—comes certainty.

“And with certainty comes a kind of inner peace.”

Have you read a nonfiction book that seemed almost too strange to be true? Share in the comments.

12 thoughts on “Is This Really Nonfiction? 3 Books Almost Too Weird to Be True
—Nonfiction November”