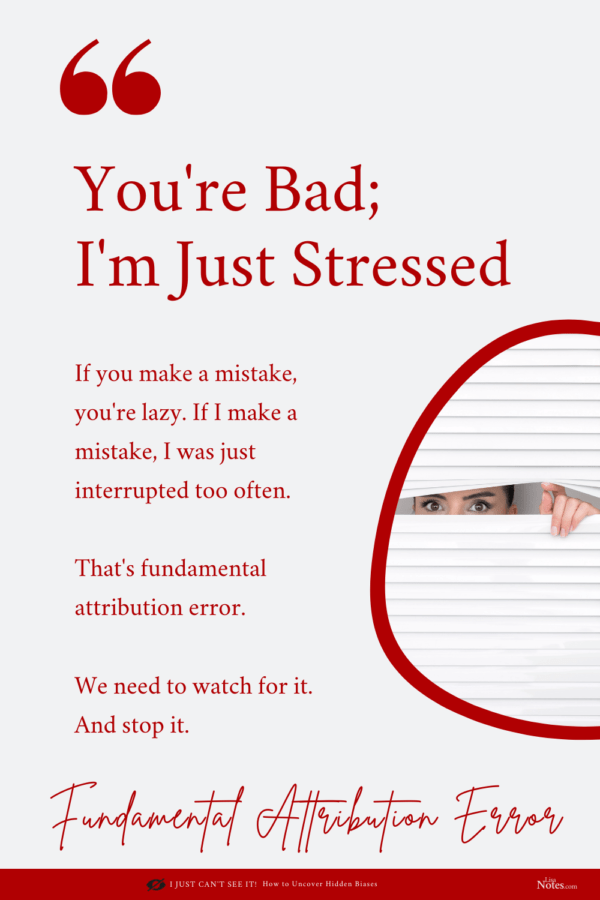 What is the fundamental attribution error?

Fundamental attribution error (FAE) is how we judge negative behavior. When other people act bad, we assume it’s a character flaw. It’s just who they are.

But when we act bad? It’s due to external circumstances. It’s not fundamentally who we are. We’re just overworked, under stress, having an off day.

What’s an example of attributing a fundamental error to someone’s character?

If a coworker makes a mistake at work, we might assume they’re just lazy and don’t care. But if we make the same mistake, it’s because we weren’t given the proper instructions or were interrupted too many times.

Here’s another example of FAE: We see someone hit another car in a parking lot. We assume that person is a bad driver and goes too fast.

But if it happens to us, we only hit the car because it was in our blindspot or it came out of nowhere (um, I’m not speaking from personal experience, am I?). We know we’re a good driver and are always paying attention.

Why do we have this tendency toward FAE?

As with many of the other biases, fundamental attribution error is a mental shortcut. It’s easier for our minds to jump to the conclusion that a person’s behavior is a result of their personality versus trying to explore other possible explanations.

Interestingly, culture plays a role on who is more prone to this bias. In cultures that are strong in individualism (look at the United States), people are more prone to make the fundamental attribution error. They judge others quicker for not pulling themselves up by their own bootstraps, regardless of outside circumstances.

But in cultures that are more group-oriented and who value the collective good (such as east Asian countries, Latin American, and African countries), they’re less likely to have this bias. They are less likely to erroneously assign character flaws to other people.

Why is it dangerous to have FAE?

It causes us to jump to the wrong conclusions about a person before we know all the facts. We assign blame and intent when we don’t have access to a person’s motivations.

It hurts our relationships on every level (work, play, parenting, romantic) when we judge others unfairly for character defects instead of also considering external circumstances.

How can we counter FAE?

Remember we all have a tendency toward this bias if we’re not aware of it. Keep in mind that it exists.

Also, reflect back on past situations that could help explain a person’s behavior. There may be outside reasons you can piece together. Perhaps think of what might cause you to behave in this manner in a similar situation.

Consider all the possibilities. When possible, give someone the benefit of the doubt first. Listen to their explanation of why something happened instead of blindly assuming they are at fault because of their character.

Don’t take someone else’s bad behavior personally. Odds are there are other factors involved instead of “they’re just a mean person” who is trying to hurt you.

And again, as with the other biases, slow down your thinking. Instead of believing the first explanation that pops into your mind, give it time. Other more reasonable ideas may present themselves, if given the opportunity to surface.

Jesus understood that people needed to be seen for their true character, made in God’s image, taking everything into account. He saw hope for redemption in every person.

Knowing how they would later behave, he could have called his followers “deserters” or “traitors” or “doubters.” But he didn’t. He saw them as more than their behavior on their worst day.

Jesus also tells us to not judge others without a long look in the mirror. “Why do you see the speck that is in your brother’s eye, but do not notice the log that is in your own eye?” (Matthew 7:3). And “Let him who is without sin among you be the first to throw a stone at her” (John 8:7).

Examine our own hearts first. Then we’ll listen more carefully to each other’s hearts. And show grace more. Just like Jesus wants us to.

How have you prematurely judged another person without having all the facts (which is always)? Share in the comments.

You are on Day 15 of the series: “How to Uncover Hidden Biases.”