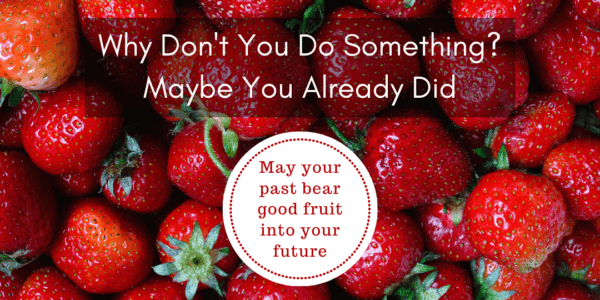 I didn’t know what to do. So I froze.

If I’d had more warning, more time to think about it, maybe I could have responded.

But instead, I just watched it happen, this adult interacting with a child in a way that made me want it to stop.

It was a gentle teasing from a father to his child, a playful interaction. It was nothing inappropriate in any way except for age. The little daughter simply wasn’t old enough to understand the game.

Another year, maybe two, and she would have laughed along. She would have participated in the game and perhaps won it. She wouldn’t have been confused.

The room was full of people watching. We all laughed a little. But the longer it went, the more uncomfortable we grew, at least the sensitive ones among us.

The little girl began getting frustrated with her father. Maybe he would have broken in another minute anyway.

But a young lady stepped in. She emerged from the crowd and whispered something in the little girl’s ear.

None of us heard what it was.

The little girl walked away from the game and began to play with a friend. Her frustration was gone. The dad let it go. The party went on, no one the wiser.

Except I didn’t keep the relief.

I now had a guilt hangover.

A few days later, I found the opportunity to ask the young lady what I wanted to know. “What did you whisper in the little girl’s ear to turn things around?”

She said she told the little girl, “Remember the lollipop I said you could have later? You can go get it now!”

I thanked her for intervening that day. I told her I was proud of her. She’d made me feel better, and I know she made the little girl feel better too.

Upon reflection, perhaps I had done something.

She was my grown daughter, once my own little girl. Maybe I had done something right in the raising, by God’s grace.

Or, more likely, maybe in spite of my raising, by God’s grace, she was now doing the right things.

Maybe I still should have spoken up that day. Maybe I should have been the one who took action.

But then again, maybe I had already taken my action. I raised a daughter who will speak up.

I’ll count that as a team victory.

May my children continue to surpass me in every way.

May your past bear good fruit into your future.

Have you ever had a guilt hangover from something you didn’t do, but wished you had? Share in the comments.

14 thoughts on “Why Don’t You Do Something? Maybe You Already Did
—May your past bear good fruit into your future”