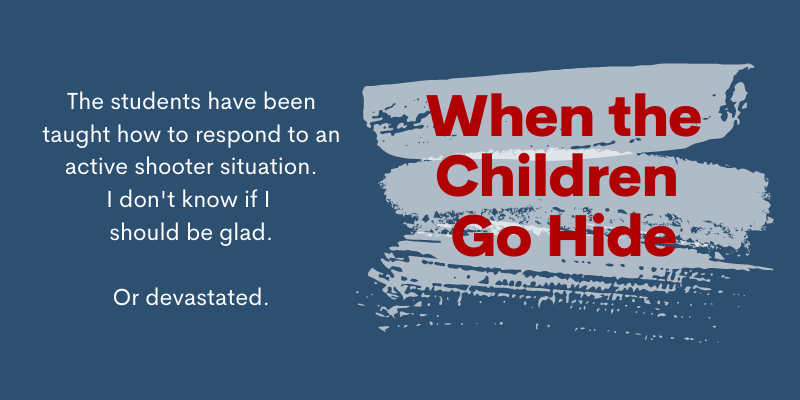 Jeff and I are sitting on the top row of the first set of seats, sunken right below the main lobby and walkway at the newly renovated Legacy Arena in Birmingham. We’ve been watching the Alabama High School Basketball State Finals on this March weekend.

This Saturday afternoon we’re watching the boys and girls finals for each region. The games have been nail-biters. We’ve been amply entertained.

Until the already noisy arena becomes much noisier. But it’s not from the basketball game.

It’s from the hallway right behind us. There’s a flurry of activity.

We see the crowd gathering. We hear the teenagers yelling. We overhear rumors there’s a fight.

But then we see something very different.

Across the arena in the student sections, we see crowds of teenage spectators suddenly running frantically down the steps of the arena, climbing over the rails, to escape to the nearest exits.

And the students left behind who haven’t evacuated?

They’re hiding. We see them crouching as low as they can get under their stadium seats.

What is happening here?

And what are Jeff and I supposed to be doing???

Surely the announcers will give directions soon. But they’ve either disappeared off the court or are hiding under tables courtside on the arena floor.

My heart is pounding. My thumbs are scrolling through Twitter. Sometimes it’s quicker to get news from social media than in person.

I start gathering my belongings into my clear plastic bag, the one that was inspected for illegal weapons when we entered the arena at 9:00 this morning. I want to be ready to dart out in a hurry, if we decide it’s needed.

The game will resume shortly.

The students crawl out from under their seats.

False alarm or not, knowing how to protect themselves in these scenarios are what these students have trained for.

The students have been taught how to respond to an active shooter situation.

I don’t know if I should be glad.

We never heard for sure if shots were actually fired that afternoon in the Birmingham arena. There were no reported injuries anyway. My heart breaks for those in other places who’ve had very different outcomes in their schools, their shopping centers, their movie theaters, etc. Lord, have mercy.

12 thoughts on “When the Children Go Hide”