This story happened a year ago. I wasn’t sure when to tell it. Maybe now still isn’t right.

Storms had been predicted all day. Everyone was still on edge from the huge tornado outbreak in Alabama on April 27, 2011, that had taken so many lives and caused so much damage. 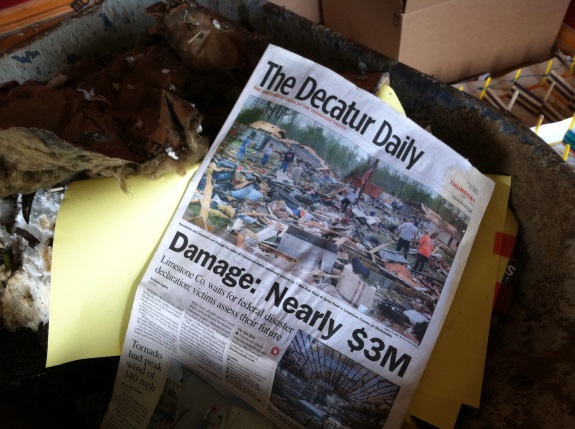 Our local volunteer clean-up groups (Keep Volunteering and PAR) begin meeting in the community often to saw trees off houses, to salvage personal belongings among neighbors, and to generally be a presence of hope and help in the community.

But we weren’t alone. People from all over also came to help. From other places in Alabama and the south. And from places far from here. One such group had several members from Minnesota, many who had never been to Alabama before and only knew it by reputation.

What kind of reputation did Alabama have to them in 2014?
We wanted it to be good, even if it hadn’t been before. 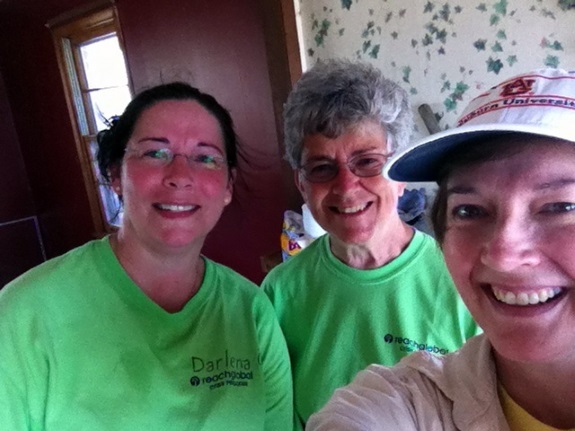 But on this hot day in May gathered around the rubble, everything changed.

Not just for them. But also for me.

The ladies I was working beside had strong northern accents. They were complimentary of the families here who had been housing them during their stay in Alabama. They had been diligent workers and had made a great reputation themselves among those of us working alongside them.

On this day, we had difficult emotional work to do. Going through an old barn on an elderly family’s property, we were deciding what could be saved several days after the tornado and what needed to be thrown away. 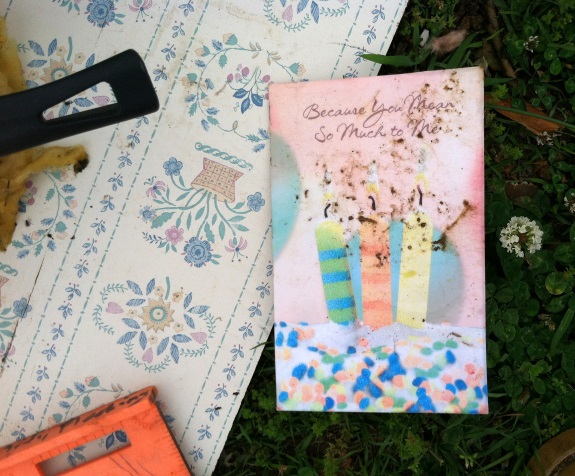 There were several Bibles in the barn. They were in awful condition after being rained on and scrambled in a tornado. I flipped through the first pages for any special dedications or notes. Nothing. No special pictures tucked inside. They were ready to be disposed of.

We had a large bonfire that morning for any trash that could be safely burned. I didn’t want to throw a Bible into a fire. But I didn’t like throwing it in a garbage pile either.

But there was more.

As things were dragged out of the barn and as the men began tearing down its walls, we saw something fluttering in the breeze from inside it. A flag was hung on a nail. It looked to still be in good shape. Maybe we could get it out.

I was trying to guess what SEC school it could be from. The colors weren’t either the recognizable orange and blue of Auburn University nor red and white of the University of Alabama.

There was a letter K. Kentucky maybe? But no, the colors were wrong.

Then we spotted a second K on the flag. A sick feeling started growing in my stomach.

They asked if these kind of things were still common down here, these signs of racial bigotry. They were assuming yes. I immediately said no. Yes, racism still exists—anyone who denies it is simply unaware. But these physical reminders of it aren’t usually so obvious.

I told them this job was mine. I wanted to be the one to take this flag to the fire. On behalf of my own African-American friends whom I love so dearly. On behalf of those I don’t know who have been mistreated through the years. On behalf of all of us who want racism to disappear forever and ever.

I tried not to cry. But I couldn’t help it. One of the women said we needed to pray. We wrapped arms and talked to God about this infestation we’d uncovered.

I knew the flag story would be retold to their friends up north as something they found in Alabama. But I wanted them to know this flag didn’t represent all of us.

In the end though, I realized it doesn’t matter so much how we looked to them; what matters is how we are.

Looking good isn’t enough; we need to be good.

Storms will come again. We know this. But through them, may our eyes be opened to what needs to be thrown away and what needs to repaired. May neighbors come together from far and wide to work side by side for restoration. And may we keep growing in positive directions to become better people this year than we were last year.

Where do you still see racism hiding? Please share in the comments.

42 thoughts on “When racism hides”