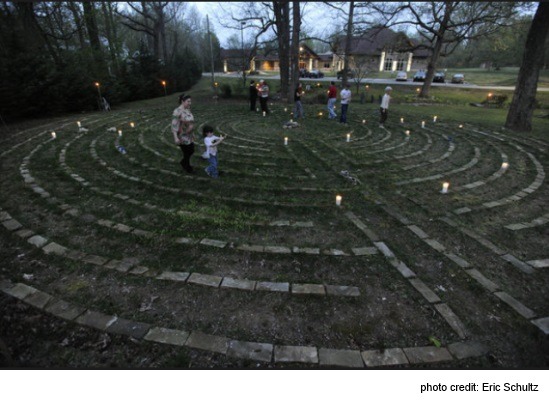 We drove up the windy road to the top of Monte Sano Mountain. Here it was still. Hushed. Beautiful.

For months we’d been meeting inside, down in the valley. For an hour once a week, we gathered to talk, to laugh, then to pray in silence, centering ourselves in God’s presence, consenting to his will, not ours.

But our field trip this morning was getting us out. Up.

Not to sit, but to walk.

At first glance, the prayer labyrinth seemed small. And confusing. More like a maze to get lost in rather than a journey to get found. The grass slightly obscured the rock sides and I wondered if I’d see where the turns were.

One sister stepped in. We waited. Then another sister. One by one, we each entered at our own pace, quietly, methodically, walking in between the stones, turning in and out as they directed.

It seemed so orderly to have been birthed out of chaos.

Out of a deadly tornado actually.

On Palm Sunday 1994, Reverend Kelly Clem was worshiping with her church family in Piedmont, Alabama, when hail began falling outside the sanctuary.

Then it got worse. A tornado swirled in, ripping the roof off the sanctuary and slamming it back down on the north wall.

Including little Hannah, the four-year-old daughter of Kelly and Dale Clem.

Much grief followed. Pain. Even now.

But as healing began to rise out of the suffering, so did a desire to help others walk through their own circumstances in life.

Years later, the idea for the prayer labyrinth was seeded, planted, and now full-grown by the Clems on the mountain outside the church building where Reverend Dale Clem ministers.

As I now walked it with my friends, I silently thanked God for my own healing—some I could recognize and some still in progress. I asked to accept pain I still wrestle with, and praised for chains he’s broken off (hallelujah!).

The prayer labyrinth was showing me the path from suffering to sense can remain a mystery. That’s okay.

I can love God when I see something good come out of bad. And when I don’t.

Because in this moment—in this step—is where his Spirit is.
And together we keep walking.

17 thoughts on “Lessons from a prayer labyrinth”