Every so often I ask myself:
Should I just disconnect from Facebook?

Facebook can be annoying at times, if you know what I mean.

Do you relate to these common complaints about how Facebook or any social media can make you feel?

But for those of us who didn’t grow up having to make anything Facebook-official or host a Pinterest-perfect party, we can (sort of) put these things into perspective when they grow unwieldly.

I recently finished previewing Donna Freitas’ book on how social media is driving young people. She wrote The Happiness Effect (not yet released) after compiling research from her interviews with college students. 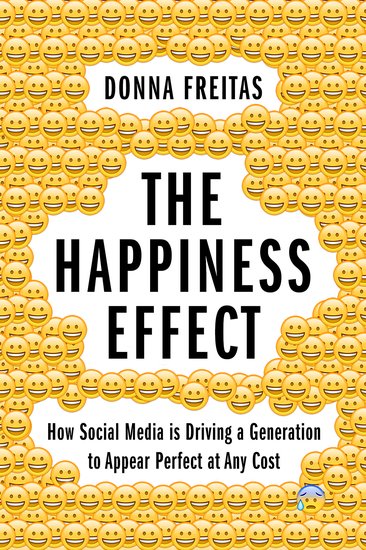 The news is sobering indeed.

On the plus side, she that we don’t have as much to worry about as the press might lead us to believe:

“I feel confident in saying that the social media world is a far less scary place overall than the press would have us believe, and that the young adults with whom I spoke are as smart and thoughtful as ever.”

But on the negative side, her research revealed many large problems anyway, including this main one:

“One unifying and central theme emerged as the most pressing social media issue students face: The importance of appearing happy.”

The students shared story after story about how they manage their online images.

“I ask what seems like an obvious question: Why keep posting if you can’t really be honest? Cherese laughs at my naiveté.

If she doesn’t keep posting things, she explains, then people also become concerned. Posting, in general, is like ‘a public appearance,’ she says. You have to pop up every once in a while to prove you are okay.”

“I ask Brandy why she thinks the online version of the self isn’t a ‘true’ version. ‘Because it’s not real,’ she answers simply. And here we come back around—as all my interviews seem to do—to the issue of appearing happy.”

“The requirement to appear happy all the time is hard to fulfill when you are going through a tough time. A painful breakup is also a reason some people quit their social media accounts for a while—if not permanently—simply so they don’t have to broadcast the process of separation.”

But despite all the problems, the kids don’t want to give up their phones.

Neither do I. I don’t want to go back to a time when smartphones weren’t around.

A better solution is to improve how we manage our smartphones. Several of the college students are already learning by trial and error.

“Yet the children coming up are mapping out their lives and experiences in this unbelievably new sphere regardless of its unknowns, because it is where our world is headed, and where their lives have begun. And soon, growing up online will be all anyone knows.

But this generation is the test generation, the one that faces working out all the kinks and complications, while we—their parents, coaches, teachers, mentors, professors, admissions officers, bosses, and future employers—are likewise faced with helping them through this massive cultural shift as best we can.”

Freitas reminds my generation that photo albums were our highlight reels. We only included the pictures we wanted and only showed them to people who were closest to us. It didn’t mean we were a fraud for not including the close-eyed photos nor that we were snobbish for not showing the whole world.

Can we help young adults understand similar boundaries in the digital world? That they don’t have to hide their true feelings, but that they also aren’t obligated to post every (or any!) feeling they have online?

Establishing healthy boundaries is something we all can help each other do.

My daughter Jenna and I ate at Chick-fil-A last night and saw the cell phone coops and the Family Challenge. (But I failed to see it until after I’d already checked my email. Oops.)

Obviously those of us at any age need periodic fasting from our devices, even if it’s only while we share a meal.

I’ll likely continue to have a love/hate relationship with social media.

But for now, I’m staying on because the good outweighs the bad.

Social media isn’t going away. Let’s learn to use it wisely so we don’t get used by it. Use it to encourage, to support, and to better love and be loved.

18 thoughts on “Should You Get Off or Stay On Facebook?”