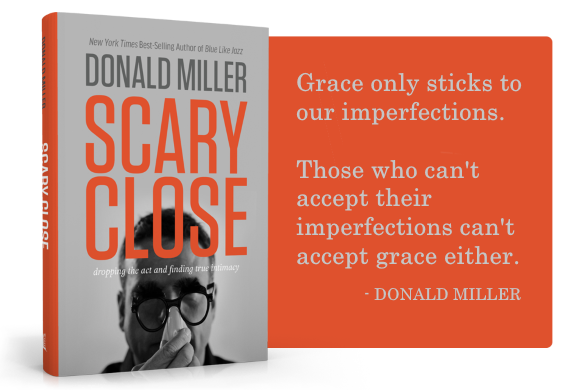 When you read a Donald Miller book, you sometimes feel you’re eavesdropping. He tells details that most people don’t. About his personal life. About what he’s really thinking.

“‘You’re being a bully,’ she said softly. ‘A bully,’ I said deliberately, as though to accuse her of drama.”

But because he does, you learn more not only about him, but also about yourself.

“To have an intimate relationship, you have to show people who you really are.”

Donald Miller is a storyteller first and foremost in his books. It’s how he gets his points across without being preachy. Some of the stories he retells had me sobbing in his latest book Scary Close. Stories of vulnerability and lives well lived and times of mess-ups.

“I looked over and he pointed at Karate’s bed. No kidding, right by his pillow was an old, worn-out teddy bear. Karate slept with a teddy bear. Unbelievable. I swear I loved the guy after that. Sometimes the story we’re telling the world isn’t half as endearing as the one that lives inside us.”

The heart of his story in this memoir (of sorts) is that performance-based relationships will leave you cold and insecure, but real intimacy—albeit painful at times—will change your life for the better. It’s worth the risk.

He walks you through his own history of relationships and you groan at times from his self-revelations. Each chapter leads you closer to his true love, Betsy (he shares their wedding photos here) and the truth about himself. In the discoveries, he realizes that no one will complete him, and that no relationship will fill all voids. And that’s okay.

“I don’t know if there’s a healthier way for two people to stay in love than to stop using each other to resolve their unfulfilled longings and, instead, start holding each other closely as they experience them.”

I appreciate Miller’s honesty, his humility, his humor. While I didn’t always need the same lessons he was learning (our demons differ), I still benefited from hearing them. And the lessons I did need? It felt like hearing them from a friend.

Here are a few favorite quotes from Scary Close.

“The last thing I learned about relationships by swimming in the pond was there are more lifeguards than sharks. What I mean is, for the most part, other people aren’t out to get us.”

“But love doesn’t control, and I suppose that’s why it’s the ultimate risk. In the end, we have to hope the person we’re giving our heart to won’t break it, and be willing to forgive them when they do, even as they will forgive us. Real love stories don’t have dictators, they have participants.”

“So I wrote. I wrote as though God thought my voice mattered. I wrote because I believed a human story was beautiful, no matter how small the human was. I wrote because I didn’t make myself, God did. And I wrote like he’d invited me to share my true ‘self’ with the world.”

“To remind myself to never go back to being careful, I made a list of new freedoms. It looked like this:

Thanks to BookLook Bloggers for the review copy of this book