Narrowing down quotes from Jesus + Nothing = Everything isn’t easy.

Maybe I should start here?

“The hard work of Christian growth, therefore, is to think less of ourselves and our performance and more of Jesus and his performance for us. Ironically, when we focus mostly on our need to get better, we actually get worse. We become neurotic and self-absorbed. Preoccupation with our effort instead of with God’s effort for us makes us increasingly self-centered and morbidly introspective.”
– Tullian Tchividjian

“Christian growth, in other words, doesn’t happen by first behaving better, but by believing better—believing in bigger, deeper, brighter ways what Christ has already secured for sinners. Realizing this has changed the entire way I read the Bible. …Our hard work, therefore, means coming to a greater understanding of his work.”

This book is overflowing with insights about relying on Jesus’s finished work instead of our own imperfect work.

So pardon today’s post being longer than normal; this is as short as I could make it. Enjoy! 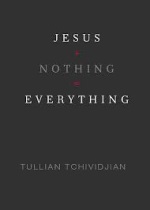 Excerpt from Jesus + Nothing = Everything

In our bones, we know that God hates unrighteous “bad” works; we’re not nearly so convinced that he hates self-righteous “good” works just as much, if not more.

In fact, the most dangerous thing that can happen to you is that you become proud of your obedience.

. . . In fact, most of us convince ourselves that we’re actually honoring Jesus with our rules and regulations, that we’re paying attention to him and pleasing him more than ever.

But all the while, we’re only demonstrating that we believe in ourselves much more than we do in Jesus. Our default faith mode is to trust, above all things, our own ability to create a safe, controllable, predictable world.

. . . The biggest lie about grace that Satan wants the church to buy is the idea that it’s dangerous and therefore needs to be kept in check. By believing that lie, we not only prove we don’t understand grace, but we violate gospel advancement in our lives and in the church by perpetuating our own slavery.

. . . The gospel liberates us to be okay with not being okay. We know we’re not—though we try very hard to convince other people we are. But the gospel tells us, “Relax, it is finished.”

Because of the gospel, we have nothing to prove or protect. We can stop pretending. The gospel frees us from trying to impress people, to prove ourselves to people, to make people think we’re something that we’re not.

. . . When you understand that your significance and identity and purpose and direction are all anchored in Christ, you don’t have to win—you’re free to lose. And nothing in this broken world can beat a person who isn’t afraid to lose!

. . . rules and regulations and standards and behavior modification are not the heart of Christianity. . . . the primary goal of the gospel is to bring about mortal resurrection, not moral reformation. Christianity is not the move from vice to virtue, but rather the move from virtue to grace.

. . . Pascal expressed it well when he said that we should make people wish the gospel were true, then show them that it is.

Believing again and again the gospel of God’s free justifying grace every day—and resting in his verdict—is the hard work we’re called to.

I think of it this way: the hard work of Christian growth consists primarily in being daily grasped by the fact that God’s love for us isn’t conditioned by anything we do or don’t do.

Sanctification is the hard work of giving up our efforts at self-justification.

Those efforts are what we’re all naturally inclined to do, and it’s what makes the sanctification process so grueling and counterintuitive.

. . . Second Peter 3:18 succinctly describes growth by saying, “But grow in the grace and knowledge of our Lord and Savior Jesus Christ.” Growth always happens “in grace.”

In other words, the truest measure of our growth is not our behavior (otherwise the Pharisees would have been the godliest people on the planet); it’s our grasp of grace—a grasp which involves coming to deeper and deeper terms with the unconditionality of God’s love.

It’s also growth in “the knowledge of our Lord and Savior Jesus Christ.” This doesn’t simply mean learning facts about Jesus. It means growing in our love for Christ because of what he has already earned and secured for us and then living in a more vital awareness of that grace.

Our main problem in the Christian life is not that we don’t try hard enough to be good, but that we haven’t believed the gospel and received its finished reality into all parts of our life.
– Tullian Tchividjian

5 thoughts on “Drop the pride – it’s all grace”