So much has changed.

I was looking through old photos for a #ThrowbackThursday Instagram post. (Check out this #SpringPhotoADayChallenge; it’s not too late to join in. My posts are here.)

I came across this picture from 2010. 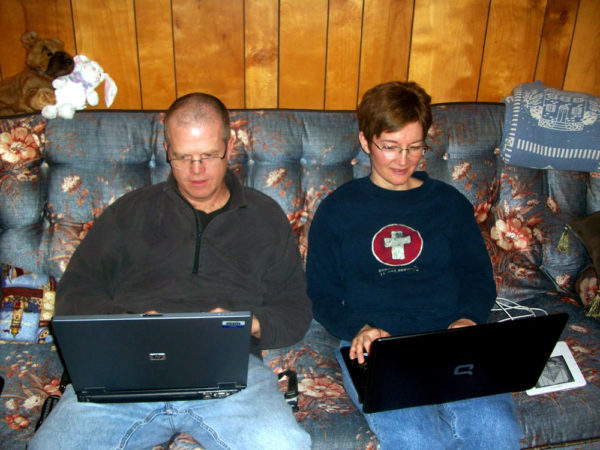 I do still wear the shirt.

And the house? It was where I grew up until I got married and left home in the 1980s.

But in March 2010, we were back spending lots of time sitting on that couch across from Mama. Daddy had just died a month earlier on Valentine’s Day 2010.

Mama’s Alzheimer’s was picking up speed after Daddy’s death. We siblings and spouses and grandkids were taking turns staying with her.

It was a hard season. But one I don’t want to forget.

Some seasons seem to move so slowly. Yet looking back, they rushed by.

But it is safe to release the past. Because the past has done its work. We won’t forget it.

Who we once were has become part of who we are now.

Maybe our hairstyles change and our clothing modernizes and our technologies update. But the people we once knew? They stick.

Who we were with then? They’re also part of who we are now. They’re embedded in us.

We can’t explain how. But we don’t have to. It’s a mystery for God to understand.

Today is my dad’s birthday. If cancer hadn’t overtaken his body (or something else by now), he would have been 81 years old. We likely would have sat across from him today on that same couch in the same living room. I miss him and my mom.

God wove our paths together when I was conceived. And our paths stay forever braided together, whether here or there, even while I live attentive in the present, and grow forward into the future.

Our dates and times remain preserved in God’s hands.

Who are you missing? Do you still feel their presence with you? It’s a mystery. Please share in the comments.

19 thoughts on “What Dates You? Let People Define the Times”