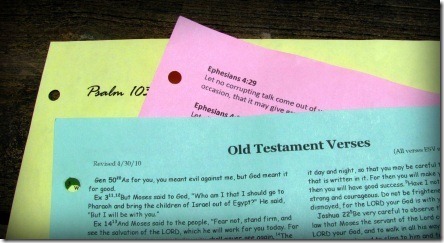 I decided last night I would skip my workout this morning. I would be too rushed to do it well.

But when I woke up early, I decided, “Well, I do have time for just a little.”  The minimum.

Because a little is better than none.

Sometimes a little turns into more. Sometimes it stays just a little. Either way, even a little can be good.

I apply the same principle to Bible memory work. My full routine includes reviewing one page of older individual verses, reciting one chapter previously learned, and adding two verses of a new chapter. But sometimes I either lack time for all of that, or honestly, I just don’t want to do it all.

So I do just a little instead. The minimum.

Sometimes little grows into big. Sometimes not. But a little is still better than none. And even a little can be good.

The memory work might turn into simply reading the verses instead. No testing of memory at all. Or I may review only a few, lingering on one or two, letting those soak.

It’s not about me perfecting the words.
It’s about the Word perfecting me.

So I keep plugging away at my memory verses and chapters, a little at a time. Progress is sometimes hard to measure, and success, harder still.

But through at least a little, the door remains open for God to do a lot.

I apply this principle to housework, too. [FlyLady, anyone?]

What do you convince yourself to do “just a little” versus none at all?