We’ve all had this happen to us: a false accusation.

Someone has said something about us or to us about a flaw in our character or our behavior. And we know it’s not true.

How do we respond?

The normal reaction (which recently was mine, too) is anger. Sometimes a lot of anger, depending on the accusation.

And does that help resolve the situation? Rarely.

I Take My Coffee Black

In Tyler Merritt’s new book, I Take My Coffee Black: Reflections on Tupac, Musical Theater, Faith, and Being Black in America, Tyler tells about being falsely accused of sexual misconduct when he was a youth minister at a church.

He knew it was not true. And it made him angry.

But even though he was innocent, he couldn’t shake the voices who accused him. Or even the voices in his head fueling more shame.

It took his mama’s voice to shake him awake to his true identity:

I sat on that bench, soaking it all in, gulping it down like a man emerging from a desert. Sometimes, you just need to hear your mama’s voice reminding you of who you are.” 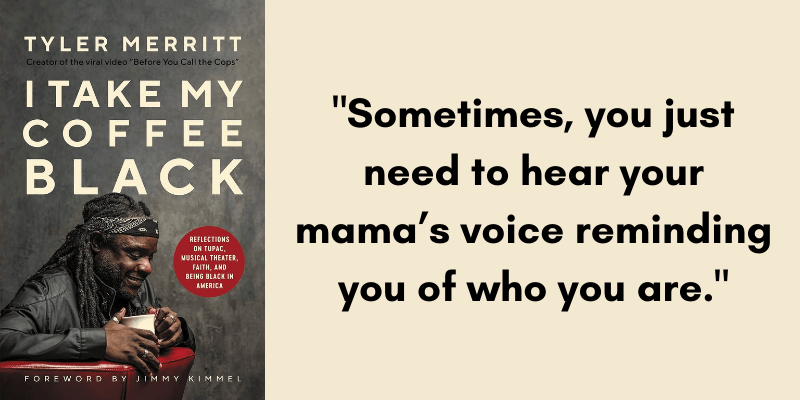 Tyler recovered by listening to voices of hope.

Before You Call the Cops

Tyler’s memoir continues with other stories about bad times and good times and everything in between. He’s brutally honest in his book about what it’s like to be six foot two and black with dreadlocks.

Tyler also writes about a time he was walking down the streets of Nashville wearing his wireless headphones, his sunglasses, and a bandana around his head. As he approached a crosswalk he saw an older white woman in a truck ahead of him.

And he knew. When he got closer, she would be afraid of him. Just because of who he was.

So before he approached her, he took off the hood of his sweatshirt to expose his face, he removed his sunglasses so she could see his eyes, and he put on the biggest, brightest smile he could.

But it didn’t help.

When the woman saw him, she still lost it. She was terrified.

If she’d only known she had nothing to fear.

Tyler was sad about it. He was angry about it, too.

And eventually he made a video to tell the world to see him, really see him, so they wouldn’t be so afraid.

Watch all 3 minutes here of “Before You Call the Cops.”

We each have our own stories of people reacting wrongly to us. It makes us mad. Rightly so. But there are additional ways we can respond than simply stewing in anger.

For our featured post this week, Theresa shares 5 things we can do when we’re wrongly accused. (She also reminds us of how Jesus responded to false accusations, i.e., he did not engage.)

Read all five things here at Theresa’s blog. (I really appreciate her godly wisdom!) Then add your own links below.

WHEN YOU ARE WRONGLY ACCUSED: 5 THINGS TO DO

Have you been wrongly accused? How did you handle it?

17 thoughts on “What Is a Normal Reaction to Being Falsely Accused?
—Grace & Truth Linkup
”