Given the choice, would you rather be the one who helps? Or the one who receives the help? 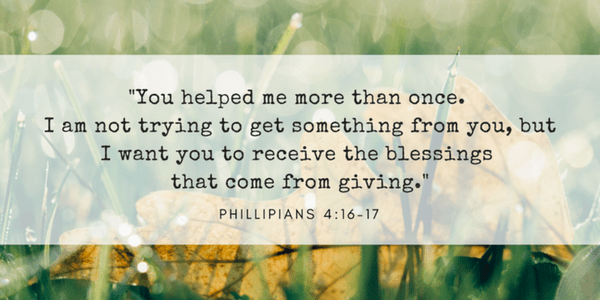 I saw the roles flip between my mom and dad.

For years my mother was the giver. She did everything for my dad. Ironed his shirts (and often even ironed his handkerchiefs!). Cooked him eggs and biscuit every morning. Packed his lunches for work.

But bit by bit, as Alzheimer’s stripped away her abilities, the roles switched. My dad became the caregiver. He’d seen my mom do it for him for years. Now it was his turn to do it for her.

Perhaps he would have, but likely not. Instead, Mama’s disability gave him the opportunity to develop new abilities of his own.

So it is with us. Our weak spots give others the opportunity to grow stronger.

We’re often uncomfortable accepting others’ help. We’d rather fold your clothes than have you do our laundry. We’d rather cook an extra meal for you than be the friend in need of a meal.

But we don’t always have the choice.

Whichever side of the gift we’re on, can we find contentment?

Both roles bring blessings with them, the Lord assures that, if we watch for them.

Uncomfortable or not, sometimes that’s just the way it is.

Accept the help. It might be God at work. Not just for you, but also for someone else.

Would you rather give help or receive help? What gets in your way of accepting it? Please share in the comments.

46 thoughts on “Let Them Help You”