He calls because he’s in deep pain. He doesn’t know what to do. I hear the desperation in his voice.

I don’t know what to tell him.

She calls because life is about to change. Again. New obstacles, fresh challenges. She wants to be optimistic, but so many things are in the way.

I don’t know what to tell her. 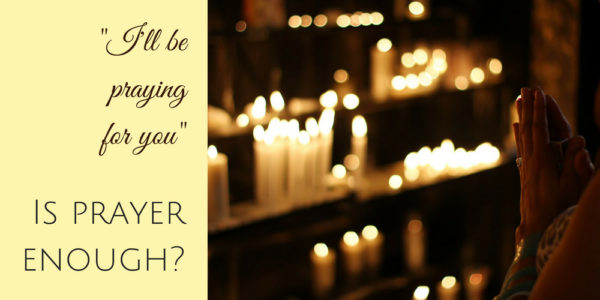 Is Prayer a Cop-Out?

But when the needs seem so urgent and tangible, “I’ll be praying for you” feels inadequate.

“You come upon an old friend dressed in rags and half-starved and say, ‘Good morning, friend! Be clothed in Christ! Be filled with the Holy Spirit!’ and walk off without providing so much as a coat or a cup of soup—where does that get you?
Isn’t it obvious that God-talk without God-acts is outrageous nonsense?”
(James 2:15-17, The Message)

People tire of hearing only “I’ll be praying” if they know actions are also needed.

We see it after mass shootings. If politicians tweet only about prayers, they get backlash. Prayers may be good, people say, but they also expect actions, maybe change a law, with the praying.

It’s an old dilemma. James also said faith without works is dead. Faith is completed by works. A person is justified by works and not by faith alone (James 2:20-26).

Or should we blame the person in need of prayer? Are they responsible for their own dire circumstances?

No. Not everyone starts off with money from the bank (or family support or a healthy body or a stable mind). Or maybe as an adult they don’t have enough mental, emotional, or cultural skills, or the right circumstances, to make it last.

According to the World Values Survey, most Americans believe the poor just aren’t trying hard enough. They could dig out if they’d apply themselves. (Interestingly, most Europeans disagree, according to the same survey.)

We’re more comfortable believing success is within our individual control. If someone doesn’t succeed, we say they only have themselves to blame. It’s enough if we only say we’ll be praying. We’ll have done our part.

Or am I to blame for not being able to adequately help others? To do nothing but pray?

I don’t want to doubt prayer, to doubt God, but do I?

Sometimes the problems seem too big.
My resources too limited.
My God too slow?

So what can we do?

And as we pray, maybe God will prompt us to take a second step. Maybe he will supply us with an idea. Or renewed energy. Or proper direction.

When I talked to my friends on the phone this weekend, I encouraged just one step at a time. One day at a time.

Maybe I need to take my own advice in helping them. Take just one step.

Because prayer is doing something.

Whether or not we see its effects, God is on the move when we pray.

We don’t always have to say “I’m praying for you” if it sounds too trite.  If it would offend.

Throwing ourselves on God’s mercy is always the right action.

I don’t know what will happen with my two friends. This isn’t the end of their stories. They’re still in the middle.

I did tell them both I’ll continue to pray for them. But hopefully I’ll also do for them, too.

I’m in the middle with them. With all my inadequacies, my fears, my own struggles. For now, that’s where we are.

But I’ll keep praying about it.

Please share your thoughts about prayer in the comments.

18 thoughts on “Is Prayer Enough?”