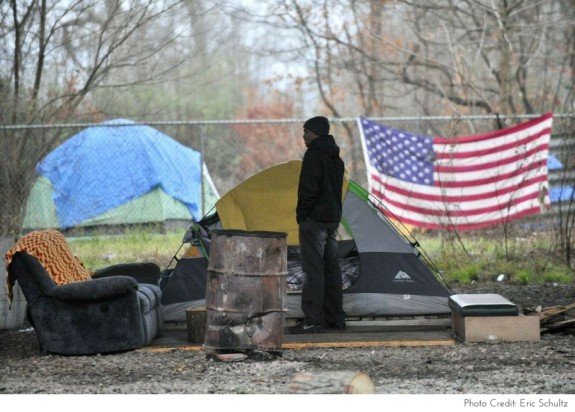 Buck (not his real name) and I are engaged in a conversation. It’s about the government. It’s getting heated, not because we disagree but because the subject gets him riled up.

I’m getting uncomfortable. Maybe I should change the subject to something less volatile.

But then Buck says something that shakes me.

If the world as we know it ever comes to a halt, whether it be by our own government (Buck’s presumption) or by outside forces, he says he knows who the survivors will be: his kind.

His people—the homeless—know how to survive.

I believe him. They prove it in my city every day.

They are survivors. How else could they live day after day with the substandard food they eat, the poor sanitation they have, the diabetes and cancer and alcoholism and drug addictions and mental illnesses that many endure?

Some do die, of course. And eventually all die. As do we.

But many of the homeless live long. They’re survivors.

Sometimes I’m not sure whose world is the real one: theirs or ours.

My world feels comfortably real on my air-conditioned drive on the Parkway overpass, singing worship tunes bluetoothed in from my iPhone, bottled water in my cup holder, a full wallet by my side.

But underneath that same overpass is their world, a different world. It houses tents, a fire for cooking, and people with few possessions.

Their world feels brutally real as I stand among them that Saturday morning outside their garbage bags of belongings and chat with Buck as the loud train roars nearby.

But we return to our church van and drive back to our church building. This is the world I know best. We close ranks, hold hands, and Norm words a prayer from all of us, for all of them—the survivors.

We thank God for the lessons those survivors teach us. If they can keep on going, so can we.

I want Buck and his friends—many are now my friends, too—on my side if the worlds we both know ever come to an end.

Because eventually, all our worlds get shaken up.

Our previous separate worlds will improve and merge at the intersection. It becomes less about our differences and more about our similarities.

The same God put both Buck and me in this same world.

And we are survivors together.

47 thoughts on “Homeless and Us – Survivors Together”