When I broke my arm, I got a baby blue cast. Anyone who saw me, saw my cast. They knew I was injured. Friends—and even strangers—would ask, “What happened?” or “How can I help?” 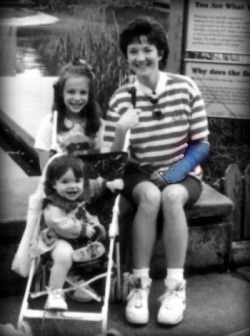 So I perked up when Pastor Mark announced yesterday that his sermon would be on “Healing Your Hidden Hurts.”

My mind did a quick search: what secret hurts am I still nursing that need healing?

I didn’t have to think long. I knew the one. It was relatively fresh with a friend. I’ve been working on it with God for a few months now since it first happened.

Was now the time to cut the cast off and start exercising the relationship again?

I came home and did the quick 10 minute test to identify my Apology Language that Pastor Mark had told us about. Maybe that’s what had been tripping me up—waiting on an apology that speaks to me.

I learned I’m most receptive to apologies that express regret. Ones that acknowledge the emotional pain they caused. They don’t have to be elaborate or promise restitution, but they need to take ownership of the wrong.

But when those apologies don’t come—and often they don’t—forgiveness still needs to.

So I’m exhaling. Again. I’m releasing the hurt back into God’s hands, and he can do with it what he wants to. I can’t keep holding on to it myself.

Do I feel vulnerable without it? Well, yes. Cutting the cast off my broken part leaves me susceptible again to new hurts. No one will see I have a tender spot and be wary around it.

But until we remove our casts, baring our hearts, we can’t return to a full life again.

And a whole-hearted life is what Christ came to give us . . .

See what your primary Apology Language is among these five:

When have you held on to a hidden hurt too long? What helped you finally release it? Please share in the comments.