He never dreamed this would happen to him. He walked into prison.

A prison official emptied the trash bag of belongings he brought. They allowed him to keep his glasses, radio, Bible, tennis shoes, t-shirts, stationery. They took away his baseball cap.

They left him to sit in the Cold Room for hours.

Next he entered the cell block and the doors clicked behind him.

“Clutching my trash bag, I stepped in. There I faced another set of bars. Behind me the first door rolled again and banged shut. A voice came from a speaker in the ceiling. ‘One in the trap!’ it said.”

When we’re younger, rarely do any of us imagine a life of imprisonment. Of any kind. Whether it be to appetites or money or substances, we don’t picture prisons in our future. We start out with visions of a free life.

But somewhere along the way, we, too, can get caught in a trap. And find ourselves locked away.

Bo, a strong Christian leader for years, realized that his first prison had been his thirst for success and performance.

He was a high achiever and was accomplished in everything he tried. He’d played minor league baseball for the St. Louis Cardinals farm team; had a beautiful wife and two children; started a successful church in his community; was a businessman and chaplain for the Denver Nuggets.

He wanted to please others. And he did that well. So when a friend asked him to sign a loan for him, he did. But there were things he didn’t know.

Years later, the FBI began asking questions, even after the loan had been paid back in full. Bo volunteered answers, not knowing he would end up being charged with a crime and sentenced to a federal prison.

He’s now telling his story in a book, Grace Behind Bars: An Unexpected Path to True Freedom. 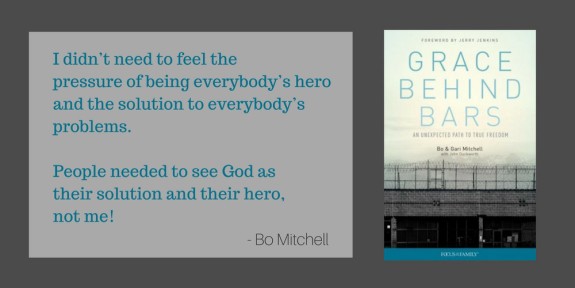 His story is unusual and well-told. It draws you in.

Thankfully the book starts at the beginning and gives you a real ending so you aren’t left wondering.

And along the way, Bo shares stories and lessons he learned in prison that are applicable not only to him, but to anyone reading the book.

“One shift I wanted to make was to stop being reckless. Too often I’d been climbing to the top of the temple and jumping off —putting God to a foolish test. I promised Gari I’d be more cautious. There’d be no more hurried, 10-minute meetings where I signed papers as I had for the ‘straw borrowing’ loans.

So I put together a ‘personal protection team’ I’d consult before doing anything in business. It included Gari, an attorney, an accountant, a bookkeeper, and two friends who’d given me wise counsel.”

He learned to be more dependent on God and on others. He had to surrender to things that were out of his control. He began asking more questions before he made decisions. He had to move slower.

He learned to trust that God could use anything—even prison—for his good.

“If I’d known that even one day in prison was a possibility, I would have fought the government tooth and nail. I probably would have walked free. If so, I would have missed all the lessons I learned in prison. It had to go exactly the way it went.”

Freedom for Bo—both internally and externally—came from submitting to the process, walking with God, and allowing God to transform him into a different man.

He learned to receive God’s grace.

He provides hope that the readers can receive God’s grace, too. Even for those in literal prisons. Freedom is available. Keep your hands open for God’s gifts. Even the ones in unusual packages.

Do you feel imprisoned by anything? How can you get to freedom? Please share in the comments.

Thanks to Tyndale House
for the review copy of this book