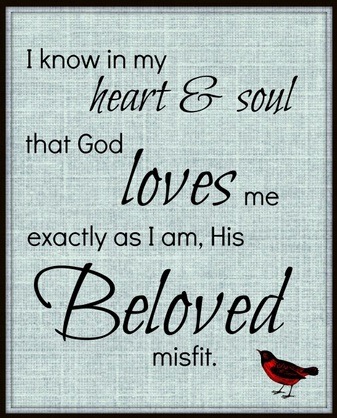 Sometimes I’d read Michelle’s words in her memoir Spiritual Misfit and think, “We are just alike!” We’d have been the two competing over bonus points for valedictorian of our class. Trying to do all the right things. Wanting to be good girls who followed the rules.

But then she’d throw in a zinger of how conversations like this (below) were foreign to her, and I’d remember our backgrounds were very diverse:

“Time and time again I was startled by Nebraskans’ comfort with discussion of all things religious. Take, for instance, this question, posed with frightening regularity: ‘So, what church do you belong to?’ Or worse, this inquiry: ‘Have you found a church family yet?’ A church family? Come again? I didn’t have a blessed idea what a church family was, so I certainly hadn’t been looking for one.

Asking an acquaintance in Massachusetts what church she belonged to—or heaven forbid, if she had a ‘church family’—would be like asking her pants size. You did not go there.”
– Michelle DeRusha

But I grew up in the South’s Bible Belt. Conversations about church family are casual and frequent.

Yet even though Michelle and I grew up in different faith traditions—she, Catholic; me, Protestant—and thus came at our adult faith from different childhood angles, we still have much in common. And so her book felt like home to me.

We only differed in what we doubted, not that we doubted. She doubted if God existed at all; I doubted if grace was as good as it sounded, if the system I grew up in had salvation worked out like they claimed.

Thus we both were/are spiritual misfits in our own ways.

“My quest for faith began with sincerity—with admitting to myself that I did not believe in God. After all, I never would have been open to the possibility of God if I hadn’t first admitted to myself that I had doubts. Declaring my unbelief was the first step; declaring my unbelief allowed me to begin to seek authenticity. If I hadn’t faced this truth head-on, I would have persisted in my pretend faith, perpetuating the false notion that I believed while in reality practicing faith in name only.”

She shares quite openly how she journeyed from a closet atheist to one who now believes (on most good days anyway) in the “radical embrace of grace and love, the embrace of Jesus.”

She doesn’t mind telling on herself, including this funny, but relatable, story:

“In a span of thirty seconds, I grabbed a handful of Cheez-Its, crunched them in my fist, and threw them at Rowan, orange crumbs cascading like sprinkles off his carrot-top head. (Note: This is actually an effective strategy for summoning shocked silence and a total cessation of pre-bedtime lunacy, but I advise to use it sparingly.) I rattled off a list of lost privileges rivaling a day at Guantanamo Bay—’No books! No snacks! No story! No snuggling! No prayers!’ (Yes, I took away prayers.) Then I dropped each boy howling and sniveling into his respective bed. And burst into tears myself. . . .

I received the chance to start over the next day and the day after that. That’s what Brad tried to tell me as I wept on his shoulder, bemoaning the fact that I’d ruined the chance to be a good Christian, along with ruining his birthday. The problem was, I didn’t really get it. I didn’t understand the concept of grace yet. And it would take awhile before I did.”

I know Michelle is the real deal because (1) I’ve been reading her a long time and she’s consistent in her authenticity, and (2) who would make up this kind of stuff?

“I even thought about suggesting to the kids that we pray out loud together. But I ditched that idea when I realized it probably would have panicked them further. ‘What?! Mommy’s praying? Mommy’s praying! We’re all gonna die!!’
We made it to shore. I lived to tell about it and complain about it.”

“This was the clincher: I truly believed in that moment that if it were not for other people, I could have been a good Christian. I believed that if it had been just me and, say, the birds and the squirrels, I would have done okay. I thought I could be a good Christian among animals. But it was people—people with their comments and their judgments and their good intentions—who taxed my ability to behave as I should. My fellow human beings made the whole Christian attitude things very, very difficult to achieve.”

I laughed and cried my way through this book, even to the very last sentence in her acknowledgements (yes, some of us are compelled to read even those):

“And finally, thank you God, for pursuing me, fighting me, and holding on to me by the scruff of my neck. I know I’m stubborn. I’m sure glad you are too.”

Amen, Michelle. And speaking for spiritual misfits everywhere, God’s stubbornness is a grace to us all.

Read why Michelle wrote the book she needed to read

12 thoughts on “Are You a Spiritual Misfit, Too?
Book Review”