“If you’re suffering, it means you have a heart. Suffering is evidence of your capacity to love, and only those who understand suffering can understand life and help others.”
– Cuong Lu

I’m weary from the losses.

And all the things that go with it. Sleepless nights. Lots of crying. Multiple prayers. Endless questions.

In my circle, no one has died or moved far away lately (those are big deaths). We understand the grief left behind with big deaths. Intense pain is normal. It can last a long time.

But smaller changes can leave big holes, too. They also are painful. And these smaller deaths come more frequently. They add up.

My latest small death is a crushed dream. Like many small deaths (and sometimes large ones), it’s cloaked in uncertainty, especially in these early stages.

Some cuts are minor and heal quickly. But others slice deep and leave scars.

New pain can also trigger old pain. It mixes and mingles and we have trouble sorting it out. The small death I’m handling now is sending me back to past big deaths. The suffering in increased by the memories.

I don’t know yet if this cut will be resolved quickly and heal. Or if it will dig in and last a long time. I’m praying for the former. 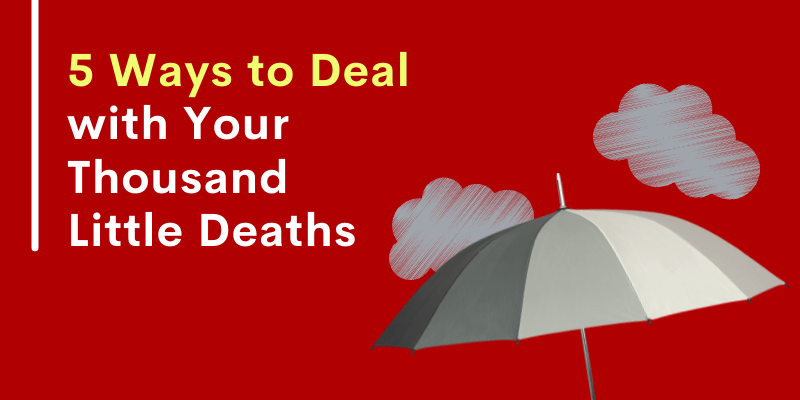 5 Ways to Deal With Small Deaths

So what do we do with these thousand small deaths we experience?

Here are 5 ways to handle small deaths before they squeeze the life out of you.

Isn’t the worst thing about loving a pet knowing it will likely die in a short span? It sounds gruesome, but just as we understand every living being will die a physical death, we also should expect other small deaths along the way.

It helps to accept death. With the uncertainty of life, we can never predict exactly which deaths we’ll experience. But it’s guaranteed they will happen. They all come: Good losses (sometimes we WANT things to die, such as a negative circumstance), bad losses, and neutral losses.

Change is a constant. Expect it. Experience it. Grieve it. Go to its funerals.

And know that another change will soon take its place.

I have a hard time deciding when to clean up my flower beds at the end of the summer. As long as there’s one sickly bud hanging onto one sickly stem, I hold on to hope.

But sometimes it’s healthier to let things die in their appropriate season and be done with it. People drift away; circumstances change; seasons shift. It helps no one to hold on to dead things. If nothing died, what a mess we would be in.

When a natural life cycle is complete, let it die. Something new is waiting to grow in its place.

Other times, things may need to change, but we refuse to let them go. I’ve developed a bad habit of putting clothes I no longer wear into the spare bedroom closet. But do I ever return and wear any of those clothes again? Not yet. I need to just give them away to start with.

We often hang on too long to a toxic work situation or an unhealthy church or an abusive relationship because it’s painful to imagine life without it. But isn’t it more painful to stay?

Making an intentional decision to walk away feels like a death. But until we do, we continue to die ourselves. Giving up on a bad situation allows breathing room for new life.

Researchers says we hold tightly to a possession once we own it, even if it’s just a free tote bag we were handed from a job fair. Because it’s now “mine,” I need to keep it.

But maybe life would be easier—and thus death easier, too—if we’d hold things loosely to start with, instead of clinging so tightly from the beginning.

Don’t grab hold and claim complete ownership of children, of money, of beauty. Keep an open hand. We can still love strong, but hold on loosely.

Recognizing we’re just temporary stewards of God’s good gifts, not permanent entitled owners, is a healthier way to pass through this world.

5. BE WILLING TO START OVER

Don’t outrun your grief. Give it its holy time.

But eventually after every death, start again. Return to life. As Sharon Salzberg says,

“The healing is in the return.”

Salzberg says not only can we learn how to start over, but we can do it with more compassion for ourselves and for others, with less judging and harsh treatment. (Listen to Sharon Salzberg’s amazing interview here with Krista Tippett on the On Being podcast.)

A Thousand + One Lives

I’m still in the middle of uncertainty with my newest small death. As I mourn, I’m trusting God with my grief. I throw myself on his mercy and goodness.

I cry the tears out; God pours fresh grace in. I fall apart; he puts me back together. (And he often uses my husband and others as his instrument; thank you, Jeff and others).

I’m not happy about it. But I have to accept death, even the smaller ones, as they come. The uncertainty of death is a given.

Don’t underestimate death. But don’t let it dominate you either. Grief is often the beginning of transformation. Release things as they die in preparation to receive new things as they rise up.

Resurrection is as guaranteed as death. We see resurrections every day, too.

Resurrection might not look like we expect. Or come when we want it. Most things rarely do. But that’s okay. Each resurrection is beautiful in its time. Watch for it.

“Resurrection will always take care of itself, whenever death is trusted.”
– Richard Rohr

Accept the inevitability of a thousand little deaths. It opens into a thousand and one new lives . . . if we’re willing to start over, receiving each new life slightly different than the one before.

Somehow God is with us in each individual death. And in each new life that follows. Show up for both.

Love is always stronger than death. Love is forever.

I sometimes regret choosing UNCERTAINTY as my One Word this year. It’s been uncomfortable. (Maybe IMPERMANENCE would have been more palatable?) But it is reality. I’m processing it here today.

How are you coping with the large and small deaths around you this past year? What are you afraid of losing? Share in the comments.

1. I realize this is an odd recommendation. This free app, WeCroak, sends you five short quotes per day related to death.

It’s inspired by a Bhutanese folk saying: to be a happy person, one must contemplate death five times daily. You’d think it would be depressing, but it’s actually a great way to refocus on what’s important. I’m testing it out this month.

2. A second recommendation: Feel deeply to know deeply. Richard Rohr sent beautiful daily emails last week on “Everybody Grieves.” See all the devotionals here. “All great spirituality is about what we do with our pain.”