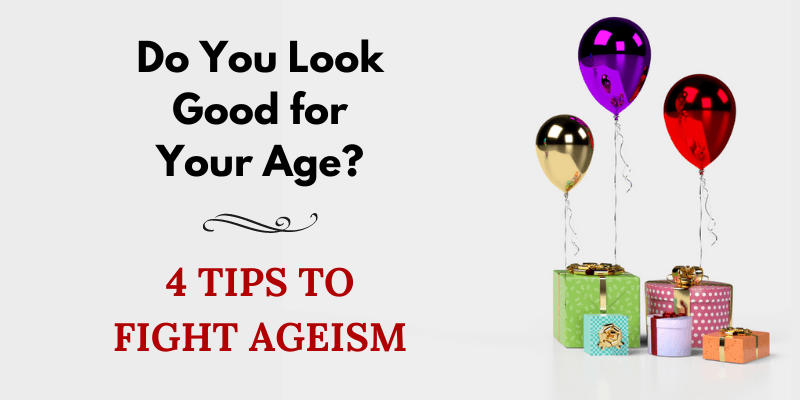 Is This a Compliment?

I tell my friend my number. He says he can’t believe it. He says I look great for my age.

Is this a compliment? Or not?

I assume nobody wants to look older than their age in our culture.

But do we need to look younger?

What Counts As Old?

If you’ve tried buying a birthday card for anyone over age 29, you’ve seen all the “old age” cards, the “over the hill” slams, the “old geezer” jokes.

But who is considered old?

By life expectancy standards, you’re “old” when you’re within 15 years of dying.

Both my parents died when they were in their early 70s, so if I follow their pattern, at 60 I’m already technically “old.”

Fear of Aging Is Cultural

In This Chair Rocks: A Manifesto Against Ageism, Ashton Applewhite writes,

“Fear of dying is human. Fear of aging is cultural.”

Maybe it’s not old age itself that we fear.

So what do we fear?

But these things are not the same thing as aging. Getting older is, well, just getting older.

Granted, the difficult things we fear do occur more often with age. But not always and not necessarily. And hopefully we’ll not be alone to deal with them if/when they do occur.

To avoid being ageist (discriminating against people because of their age, whether younger or older), here are a few tips.

1. Give compliments about the trait, not the age.
When you compliment someone, don’t connect it to their age. Instead of saying, “You’re so young at heart,” say “You’re fun to be around.”

2. Avoid addressing people with cutesy names.
Not every older person (or person of any age) appreciates being called “Sweetie” or “Young lady.” Unless you know someone prefers it, don’t do it. It might feel degrading to them, even if your intention is good.

3. Accept age as you do other traits.
Age itself should be neutral, just as skin tone, height, or eye color should be neutral. We don’t need to be blind to it, but we can stop discriminating against it.

By becoming more aware of the ageist things we think and say, we can eliminate some of the bias against olders (and youngers). After all, our goal is to keep living, thus joining the crowd of olders (if we’re not already there), and we don’t want to discriminate against ourselves.

Every Age Has Purpose

I just had a milestone birthday last week. I’m still struggling to adopt an improved mindset against ageism. I hear the negative voices in my own head about getting older.

But I’m at least becoming more aware of the ageist stereotypes I’ve been duped into believing. That’s the first step out of them.

Because as long as I’m still here, whatever my age and however I look, I want to live my best life, even with boundaries that may develop over time.

God designed each of us to live with purpose—to love others and be loved by others. We can do this at any age.

Yes, we may (or may not) have to shift the way we travel or shop or care for ourselves as we age, but that doesn’t mean we can’t live fully, with meaning and joy.

If it happens again that someone tells me I look good for my age, I’ll still say thank you.

But I might reply back, You look good for your age too, whatever age that is!

How do you feel about your age? Share your thoughts in the comments.

You may have already asked yourself this question that Jan asks on her blog: Why has God allowed me to live so long?

Read all of Jan’s post to hear her insights and gather your own.

“Why Have I Lived So Long?”

21 thoughts on “Do You Look Good For Your Age? 4 Tips to Fight Ageism
—Grace & Truth Linkup
”