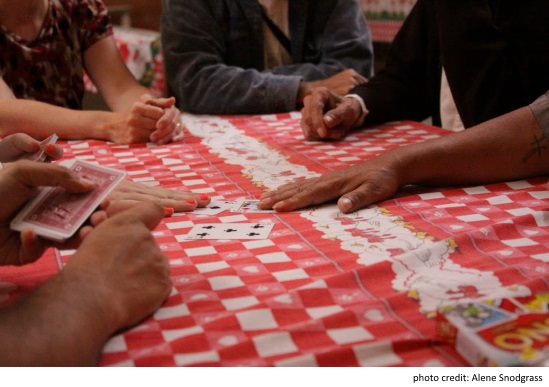 I pull up a chair at a table with a red-checkered tablecloth in a cafeteria that could have been anywhere.

Ellen opens up a fresh pack of UNO cards. It’s been years since I’ve played. Luis chats up some partners to join us.

Ellen deals the cards. Luis explains the rules in Spanish. And I try to communicate with Oscar as we play.

He speaks no English. I speak little Spanish. 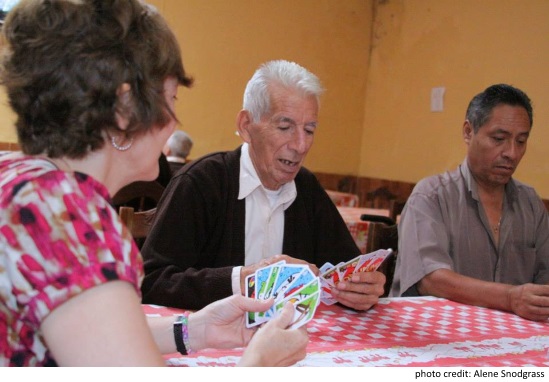 But somehow just being together is enough. We point. We laugh. We are friends.

Later, Roberto joins us. He speaks English, hallelujah! And he knows how to use it. He used to be a tour guide so he learned to speak five languages.

He asks me what I think about Jesus. He asks if I have a Bible. When I tell him it’s on my phone, he throws his hands up in despair and says, “Technology!”

He asks if I have a testimony. He advises me to learn it in Spanish.

He says I should practice my Spanish frequently with Spanish-speakers. He drills me in a few phrases (which I promptly forget, ugh).

He gives me advice I might could read anywhere, but instead, I’m getting it straight from this 80-year-old gentleman. So I strain to listen in this grandpas’ house on a rainy Saturday afternoon in September in Guatemala. 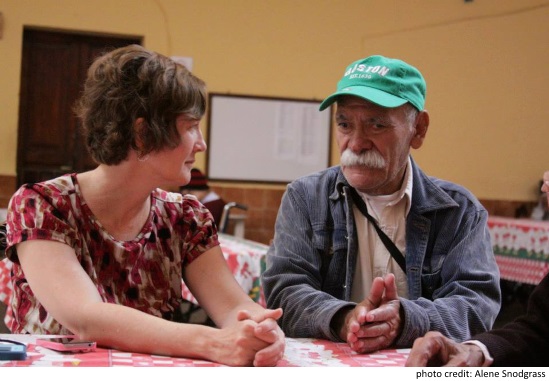 Being present makes the difference.

I want to be all here for the message God wants to give me.

A day earlier at Potter’s House, Brenda reads Jeremiah 18:1-6. She explains that God told Jeremiah to go to the potter’s house because it was there that God would let him hear his words.

Jeremiah showed up.
And so did the Lord.

Each month this year I’m practicing a different step of compassion. For October, it’s to disregard hearsay/preconceived notions about others, and instead get first-hand knowledge as much as possible.

Karen Armstrong suggests concentrating on one or two of our global neighbors or religious traditions to activate an interest in the “stranger” and to “make room for the other.” See what we can learn from them, what they can learn from us.

“Keep on asking ‘But why?’ Keep pushing your mind forward so that you can imagine yourself in similar circumstances feeling the same way. . . . Wish for them everything that you would wish for yourself . . . extend your compassion, friendship, and sympathetic joy to them.”

Sometimes I need to:

He could have given them to me another way, place, or time.

But he chose that country. That hour. That voice.

I still don’t understand God’s whole message, but maybe I understand more now than I did before.

And because of that, I’ll keep showing up. Because I want to know more. First-hand.

But don’t take my word for it. . . . How can you learn something new this month through direct knowledge instead of hearsay? No traveling required! Just be present. Please share your thoughts.